Machine elements whose rigidity changes due to internal vacuum pressure 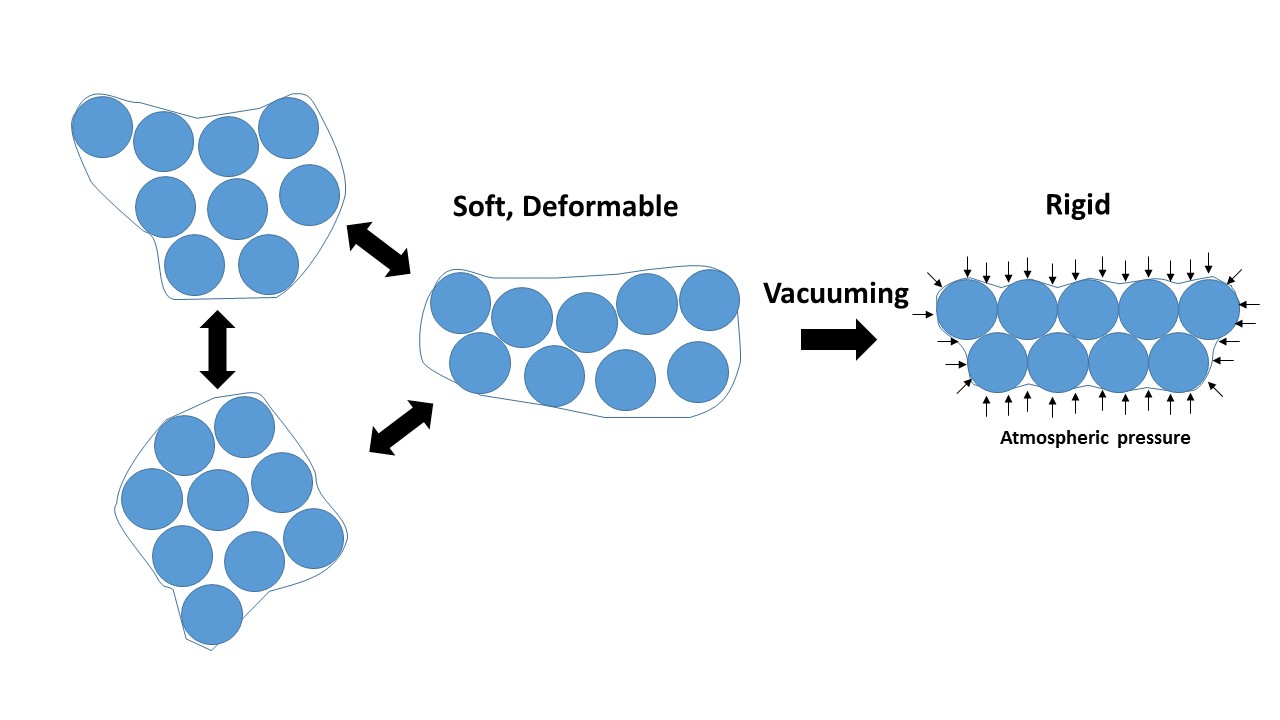 When the air inside a flexible bag filled with particles is evacuated, the particles aggregate and the bag becomes rigid (Fig. 1). When the bag is refilled with air, it returns to its original soft state. This mechanism is adopted for fixing the human body in place during medical treatment or emergency transportation. In recent years, it has also been used as a robotic hand for gripping objects of various shapes. Many researchers have used this flexible and lightweight mechanism for various applications. Other types of mechanisms that envelop objects other than particles have also been proposed. This document introduces the features of the mechanisms that have been developed to date and their applications.

Particles enclosed in a bag can move freely if there is no pressure difference inside and outside the bag. Therefore, if the bag is flexible, it can be transformed into various shapes. When the air inside the bag is evacuated, it shrinks and the particles pressed by the bag aggregate and bond with each other owing to the frictional force. Under this condition, the bag becomes rigid while maintaining its shape. The lower the internal vacuum pressure, the greater is the contact pressure between the particles and the greater is the frictional force, making the bag harder. The stiffness (external force divided by the amount of deformation) is proportional to the vacuum pressure [1],[1a].


The rigidity generated by vacuuming varies depending on the shape of the particles, the material, and the material of the outer membrane. The hardness of the machine element after vacuuming exhibits characteristics that are similar to those of an object made of the same material as the particles wrapped by an outer film. For example, in the case of rubber balls, the machine element after vacuuming exhibits rubber-like hardness. Therefore, it is advantageous to use hard particles as harder machine elements. However, hard particles are generally heavier. It should be noted that the strength of the frictional force, which depends on the shape and material of the particles, affects not only the rigidity achieved on vacuuming but also the rigidity at atmospheric pressure. Spherical particles can be deformed smoothly, but if particles with a rugged shape are added, they will become stiff and difficult to deform. In past studies, Styrofoam beads, plastic beads, coffee powder, etc., have often been used.

How to distribute the particles evenly

The machine elements used in particle jamming can be created in any shape. However, because the particles move due to gravity, there could be gaps in the elements. Because the gap reduces the rigidity of the element, it is necessary to ensure that the particles are not unevenly distributed and that they are evenly distributed even during deformation. To prevent the uneven distribution of particles, the inside can be divided into multiple spaces with films that allow air to pass through (Fig. 2). In addition, hard frames can be attached to the film to prevent buckling due to deformation.

Fig. 2 Cylindrical element used in the particle jamming technique. The inside of the element is partitioned to avoid uneven distribution of particles.

(Video) Plate-shaped elements divide the inside into multiple spaces in order to avoid uneven distribution of particles.


How to get rid of wrinkles on the surface

Fig. 3 Machine element used in particle jamming with an outer membrane that can be expanded and contracted, and which does not expand when the internal air is evacuated.


How to change the shape of the element actively

Many flexible actuators have been developed that shrink or bend due to air pressure. It is also possible to add the function of actively changing the shape of a machine element using particle jamming. Figure 4 shows a cylindrical element used in particle jamming, which has the function of active expansion and contraction due to the pressure in the internal space, in addition to variable rigidity [3].

A robot has also been developed in which bellow-type pneumatic actuators are arranged in a circle, a machine element using particle jamming is placed in the center, and the robot deforms like an elephant's nose while simultaneously controlling the rigidity of the element via particle jamming (Fig. 5) [4].

Fig. 4 Cylindrical actuator with variable rigidity that can be actively expanded and contracted. 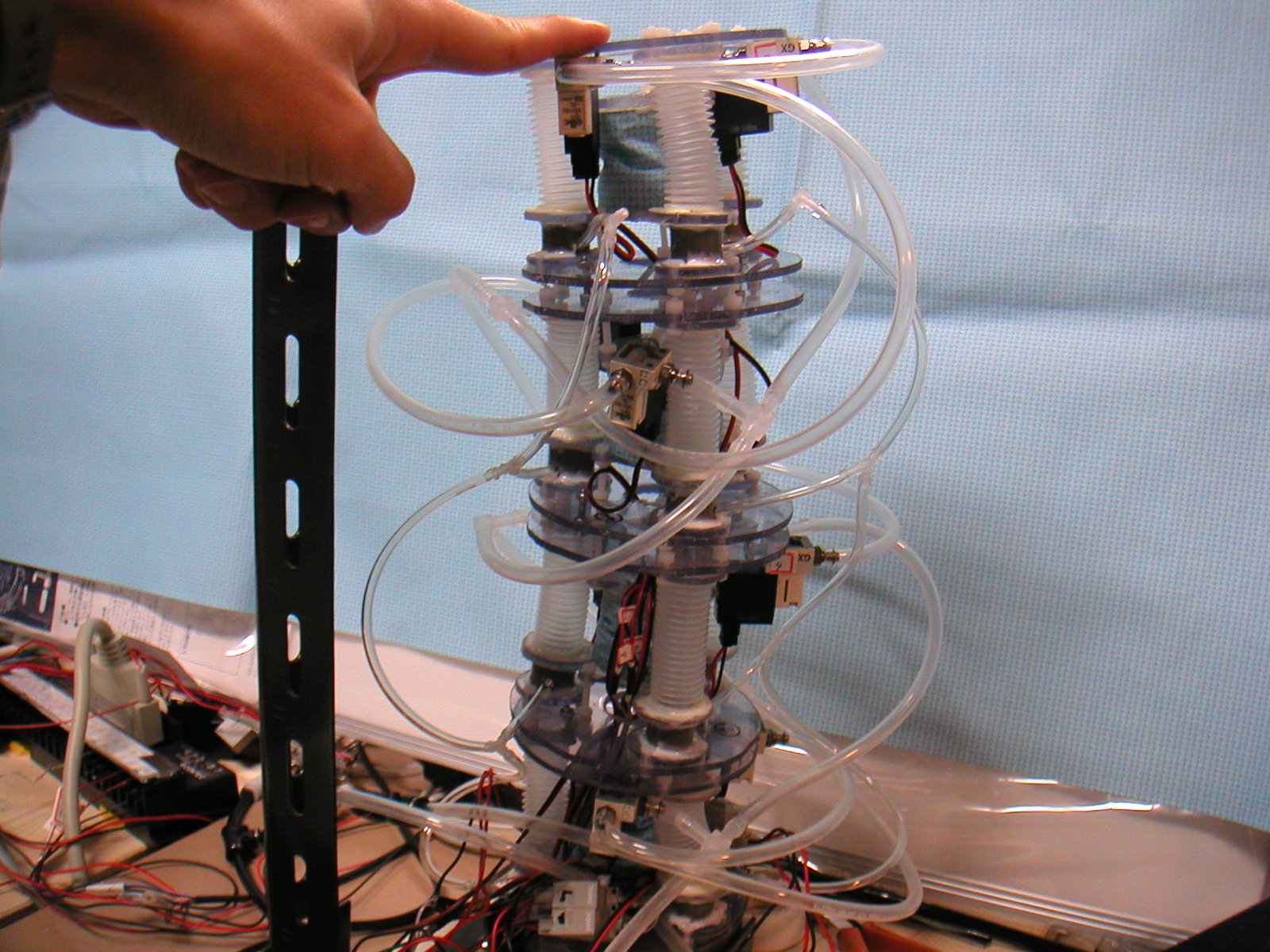 Fig. 5 Robot arm that transforms like an elephant's nose.(PMC, which was named in 2001, denotes “particle mechanical constraint”. Nowadays, particle jamming is used more often than PMC.)

How to increase the deformable range of the element

A mechanism has been proposed in which a rod is inserted into the particles and the movement of the rod is constrained by particle agglutination (Fig. 6). This mechanism can be used as a brake for flexible joints that can translate as well as rotate [5]. 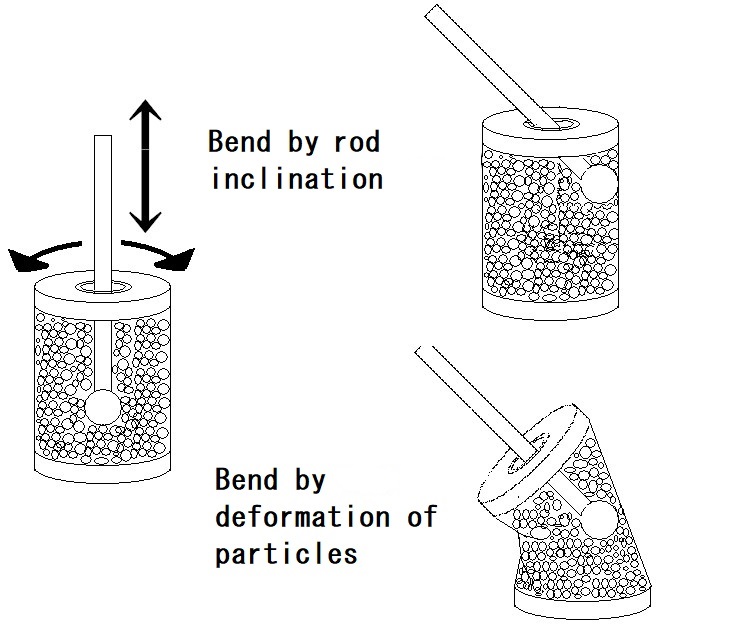 One of the disadvantages of particle jamming is the difficulty to make them thin. In contrast, an element in which multiple plastic sheets are laminated and covered with a bag is suitable as a thin element (Fig. 7) [6]. When this element bends, each sheet slides against the other, similar to a paper notebook. Therefore, if the inside is evacuated, the sheets will come into close contact with each other, forming a single thick sheet, thus increasing its rigidity. Laminated sheets can be bent in one direction, i.e., bending deformation that forms a spherical surface, but cannot be bent in two directions. On the other hand, a mechanism with increased flexibility has been proposed by knitting strip-shaped sheets [7] or combining small pieces of scaly sheets [8]. The binding-fiber-type element is a columnar element containing bundled hard fibers and its rigidity changes depending on the internal vacuum pressure, similar to the laminated-sheet-type element. This element can be bent and twisted in two directions. 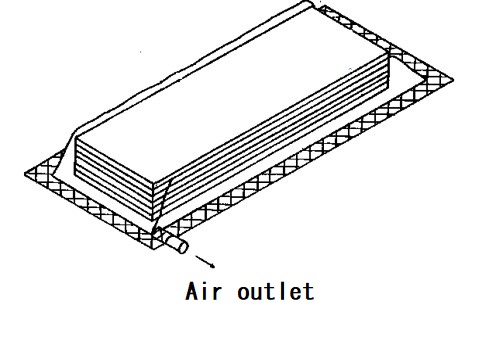 Layer jamming cannot be used for bending or deforming to form sharp curved surfaces. On the other hand, the small-piece sheet-articulation-type element exhibits high flexibility as well as rigidity [9]. As shown in Fig. 8, it is a mechanical element in which small pieces of plastic sheets with holes at both ends are stacked alternately and the stacked sheets are connected by passing wires through the holes. The holes through which the wires pass are rectangular and larger than the wires. Thus, adjacent small sheets can rotate around the connecting wire as well as slide in two directions. As a result, the small-sheet articulation-type elements can be expanded and contracted as well as bent with two degrees of freedom. A lightweight disc brake that can be operated under vacuum pressure, as shown in Fig. 9, has also been developed [10].

The fabric jamming sheet is a machine element made by laminating elastic knitted fabrics and covering them with a flexible bag (Fig. 10). It has a high degree of flexibility compared to the other mechanical elements mentioned above. In addition, it is easy to make it thin. In addition to the expansion and contraction of the fibers of the material, the knitted fabrics expand and contract owing to the deformation of the stitches. When the inside is evacuated, the overlapping stitches are fixed and the stitches cannot be deformed. Hence, fabric jamming sheets made of knitted fabrics are solidified by internal vacuuming [11].

(Video) Fabric jamming sheet that can be expanded and contracted

A particle jamming mattress with an automatic wrapping function is a machine element that deforms and hardens such that it wraps around an object when the internal air is evacuated (Fig. 11). When wrapping a conventional particle jamming mattress around an object or body and fixing it, it is necessary to evacuate the air from the mattress and harden it while deforming it by hand along the surface of the object. Therefore, it becomes difficult and time-consuming to cure the product while it is wrapped around without any gaps. On the other hand, in this mattress, when the internal air is removed, the sponge contracts, the mattress bends along the surface of the object, and particle jamming hardens the mattress simultaneously [12]. A finger-shaped gripper[16] using this mechanism and a ring-shaped gripper [17] using a similar mechanism have also been developed.


The applications developed so far in our laboratory are shown below.

(Video) Cast made with articulated elements


(Video) Hitting the cast with a hammer and placing a weight on it.

(Video) Hand orthosis made of particle jamming. This glove provides the feeling of gripping a hard object.[13] 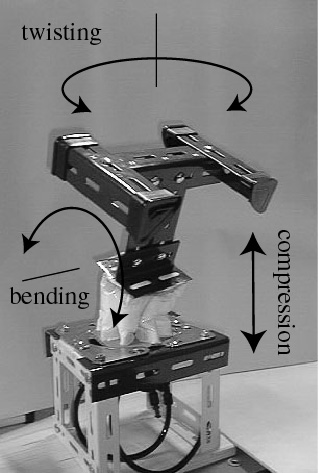 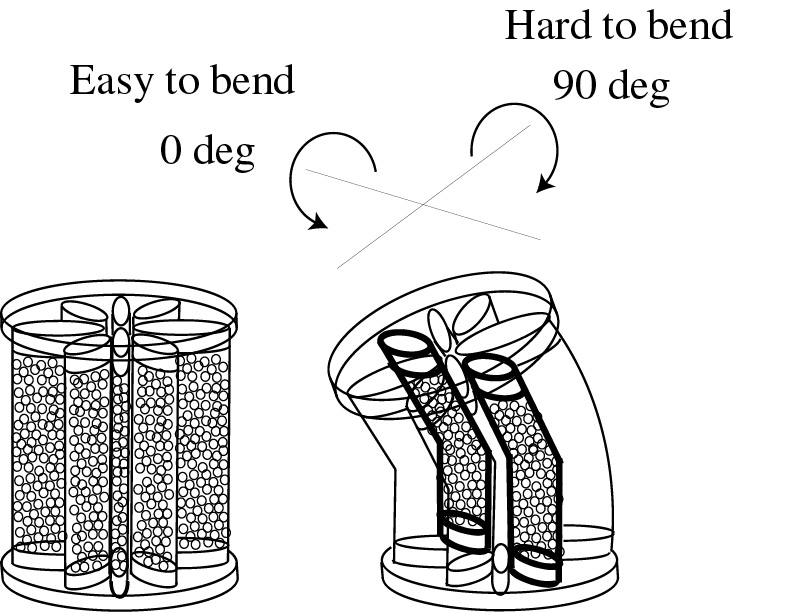 We have developed a device that provides viscoelasticity to the hands when the cylindrical element of particle jamming is fixed to the wrist and torso. This device can give the wearer the feeling of webbing (viscosity) and the feeling of contact with the wall (rigidity).

(Video) Tetris game where the user operates blocks while feeling their power with both hands.

(Video) Molding an object with a fabric jamming sheet


(Video) A fabric jamming sheet is placed over an object and vacuum suction is performed, following which the sheet becomes rigid and is removed.


We have developed functional orthoses that fix the elbow and shoulder joints or provide a load to joint movement. One orthosis can handle a variety of exercises.

(Video) A water bag covered with Styrofoam particles that feels like a dough made from kneaded flour.


(Video) A cylindrical water bag made with particle jamming 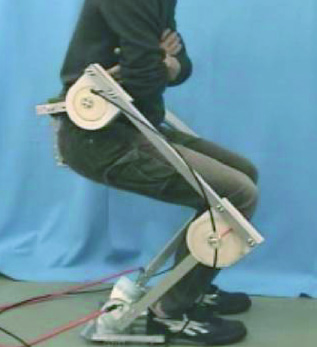 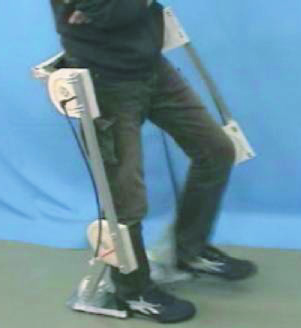 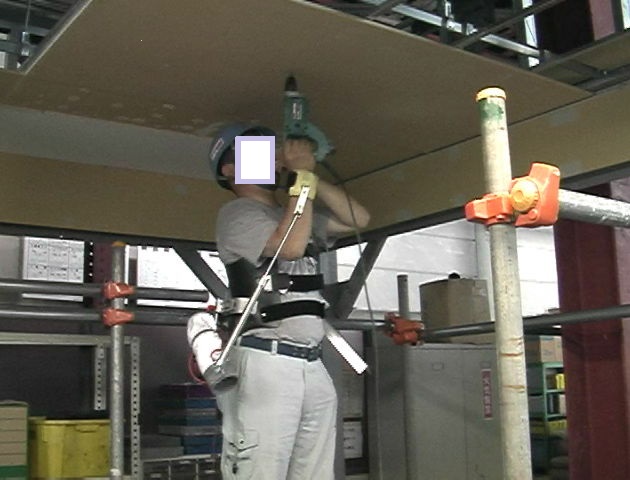 How hard is it?

As explained in the section on particle jamming, when the outer membrane is made of a flexible material, the maximum rigidity exerted by vacuuming does not exceed that of an object of the same shape made of the same material as the internal material. When the inside is at atmospheric pressure, it is very flexible, especially in the particle-type, small-sheet articulation-type, and laminated-fabric-type elements. These machine elements have large dynamic ranges. Please look at the video of each element to have an idea about the degree of hardness and softness.

How do I get rid of the air?

The inside air can be evacuated using a hand pump or an electric pump. The amount of air that must be evacuated for achieving rigidity depends on the volume inside the element. Because the rigidity of the element is almost proportional to the internal vacuum pressure, higher vacuum pressure can achieve higher rigidity. Maximum vacuum pressure (–80 kPa to –90 kPa) is achieved with ordinary inexpensive electric vacuum pumps and hand pumps. Compared to the maximum vacuum (–101 kPa), approximately 80 to 90 % of the rigidity can be achieved by these methods. You can also evacuate the element with compressed air using a vacuum generator.

How long can the hardness be maintained?

What kind of shape can you make?

It depends on the type of element, but there is no limit to the shape.

How can I adjust the hardness?

Because the rigidity (hardness) of these mechanical elements is proportional to the internal vacuum pressure, the rigidity can be adjusted by controlling this pressure. It is also possible to control the rigidity in real-time using a pressure control device such as an electro-pneumatic proportional valve.

I want to know the details. I would like to conduct joint research.

The research office serves as the contact point for technical exchanges and joint research with companies.
Contact